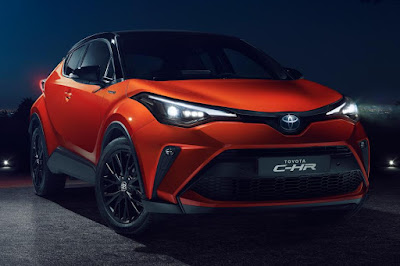 Toyota is bringing a facelift for the C-HR and a hybrid drive with more power. We were on a test drive with the 184 hp new entry
At the launch of the C-HR at the beginning of 2017, the unusual SUV caused quite a stir on the market. This was primarily due to the design. In this respect, Toyota is already used to a lot of things, especially from the hybrid sector, but with the C-HR (short for "Coupé High Rider", i.e. "higher coupé") things went a little differently. In fact, according to Toyota, 60 percent of previous customers said they had bought the C-HR mainly because of the optics. Because. Not despite.

Accordingly, the shape was carefully honed for the facelift. A new apron with a larger radiator bottom, fog lights shifted upwards, redesigned interior of the main headlights and taillights, a new rear end and three fresh colors. As a C-HR owner, you don't have to grieve, the previous model doesn't look suddenly old.

Much more interesting, however, is the new top variant. Until now, the hybrid powertrain from the Prius has tried to implement the optical sports promises of the C-HR largely without results. From now on there is a remedy because optionally the latest hybrid version of the house provides propulsion. The drive, which has already been introduced in the new Corolla and has been dubbed the "Hybrid Dynamic Force System", consists of a new two-liter suction motor and a new transmission composite with a more compact design. Two electric motors operate in the hybrid system of the C-HR. The first (MG1) serves primarily as a generator for the drive battery and for starting the combustion engine. MG2 is the primary electric drive machine.

New to the gasoline engine is, among other things, its extraordinarily high compression of 14:1. Toyota speaks of the most thermally efficient gasoline engine in the world. The four-cylinder engine contributes 152 hp, the new electric drive a maximum of 109 hp. Under optimal conditions, a system power of 184 hp is calculated. Of course, this sounds a lot funnier than the 122 hp of the 1.8 hybrid (which remains in the program).

By the way, the battery system was also changed. The 1.8-series hybrid gets a more compact and lighter lithium-ion battery with slightly increased capacity than before. The two-liter hybrid uses a nickel-metal hydride battery. Toyota is particularly proud of the new power electronics in the C-HR, where too: more compact, lighter, more powerful. In addition, it can now supply 650 volts of voltage to the electric motors. And where you were already in the renovation: Chassis and steering tuning in the two-liter hybrid also differ from the rest of the C-HR family, should come across more sporty.

So: sport. The drop-off maneuver (the C-HR basically drives exclusively electrically) now only comes over with a manageably dynamic, even the initial kilometers through the evening rush hour are only so medium exciting from a dynamic point of view. However, the Toyota C-HR 2.0l can immediately show what Toyota's hybrids have always mastered best: fuel nibbles. In order to visualize this compared to all the new plug-in hybrids, there is a new display in the cockpit that documents the driving time undercurrent. And it's actually longer than you'd like to think.

The statement behind it: You don't need external charging, you don't need large and heavy batteries either. This is Toyota-Credo since the Prius 1 and given the consumption data (just under five liters the on-board computer reports after half an hour stop-and-go) the Japanese may not even be so wrong. But at some point, it is over with pack formation and the track is free for the 184 hp of the "Hybrid Dynamic Force-System". Everyone who has ever known about Toyota hybrids knows what follows. Yes, it gets louder, the speed rises abruptly and also yes, this Toyota hybrid also drives naturally with the infinitely variable planetary gearbox. 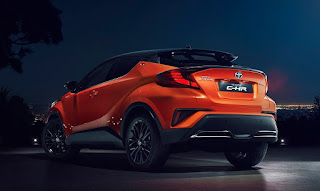 But despite this well-known high-speed acceleration – this is by no means lame. Toyota promises 8.2 seconds for the sprint to speed 100, which is almost three less than the smaller hybrid and already a statement. Above all, however, the intermediate accelerations make it feel that there is finally a bit of music in it. For example, when overtaking boomers or during a fast intermediate sprint before the end of the acceleration strip.

The driving behavior is in principle a commendable one, the C-HR can be moved, rolls and wobbles only slightly springs common and does not appear soft. However, a really intimate feeling may not occur, but the steering feel seems to be too synthetic. This also applies in general, not only in the case of brisk curves, to the brake pedal function. Light braking only activates the electrical recuperation, then the mechanical brakes bite abruptly at a firmer pressure. It has a bit of a ride-school era and needs a little training so that the passengers don't have to nod all the time.

What the Toyota C-HR still isn't: A family car. For this purpose, the legroom on the rear seats is too modest, the access (child seat!) too tedious, adults almost inevitably pick up ahead nut when boarding and children do not reach the outer door handle mounted high above. And once inside, the view through the extremely small windows is more frustrating than illuminating. Nothing has improved, because the sheet metal cover of the facelift model remains identical.

Because Toyota has of course also adjusted the prices for the facelift, the reference to the improved and extended equipment must not be missing. In the future, the basic model will be completely eliminated (hardly ordered), the series will start in the flow equipment in the future. Then there is the new multimedia system with DAB radio, Apple Carplay and Android Auto, climate control, LED headlights, the Toyota Safety-Sense System and many other niceties on board. In addition, there is the visible and noticeable improvement of individual surfaces in the interior.
Facebook Twitter